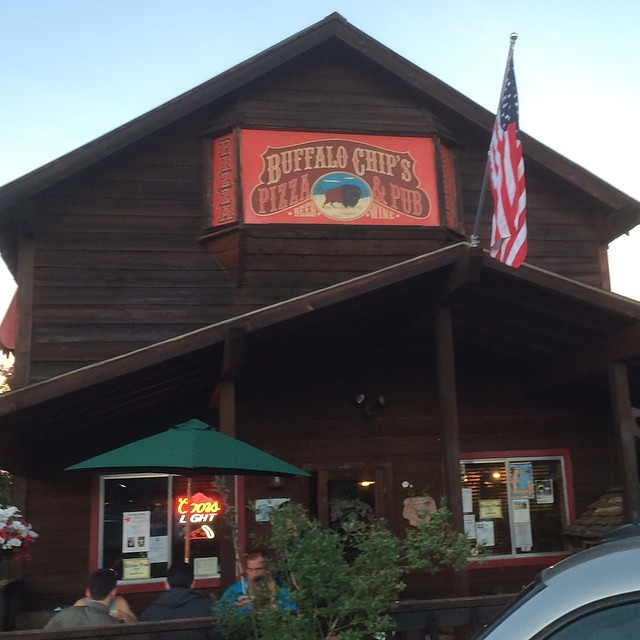 The group is slightly different this year. It includes the Tomasins (John, Julie, Mike and Chris) and the Hunters (Bobby and Yuli) plus a herd of Chabriers (Greg, Kay, Meredith, Meredith's husband, Matthew, Greg's two younger daughters and Kay's daughter). The Snipes dropped out this year.

After working out in the morning and doing some shopping, Jack and I rolled from Carmichael at 1:30 pm. Sharon is planning on coming up on Sunday. For the first time, we are bringing a dog on the trip. After two short stops, we rolled up to the Dorado Inn via Chico and Highway 36 about 4:45 pm. The Tomasins were already there and unloading.

We visited for a bit and then headed to Chabrier's house. The house that Hunter and I are renting is not available until Sunday. As a result, Jack and I will be crashing there on Saturday night.

The group eventually got organized and headed to Buffalo Chips in Westwood for the traditional first night dinner. I was surprised how crowded the place was. I wonder if we usually get there later and miss the crowd.

After dinner, Tomasin, Julie and I stopped for a nightcap at Chuck's Railroad Room [it may have changed names?]. I finished the night on the deck of Chabrier's house before crashing on the couch. Jack slept on a mat on the floor.
By Heringer at 8/09/2014 11:59:00 PM