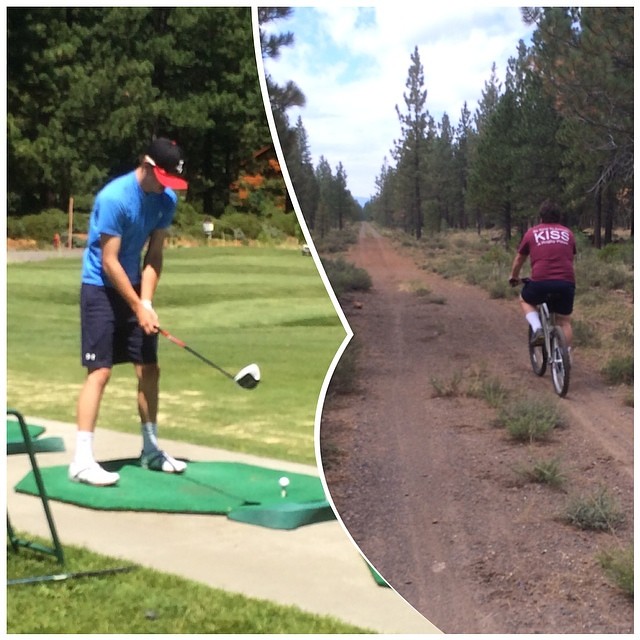 With the Tomasin's taking off for Redding later in the day and the lake very windy, I convinced him to go with me on a mountain bike ride. We loaded up the car and went to the Mason Trailhead of the Bizz Johnson Trail. While I have hiked and biked most of the lower two-thirds of the trail. I have not explored much of the top part of the trail. Sharon, Jack and I did a short hike from the Mason Trailhead in 2005. Tomasin and I ended up doing a 7.25 miles round trip.  This section of the trail is not as interesting as the other parts of the trail that I have ridden with Jack. I am going to do a longer post next week that pulls together all of the different rides and hikes that we have done along the Bizz Johnson Trail.

When we got back to the Dorado Inn, Tomasin et al took off to visit his mom in Redding. I picked up Jack. We went into Chester and had lunch at Subway while playing cribbage. After lunch, Jack and I went to the driving range. Jack has not played golf in more than a year. With golf on the schedule for Thursday, he wanted to hit some balls. He and I ended up hitting more than 100 balls a piece. Although it did not seem to translate to Thursday, I felt very good. Jack struggled and was hitting everything very right.

After we got back to the cabin, Jack, Tiber and I headed up to the Chabrier's cabin to let Tiber play with Raider. Sitting and watching everyone work on a jigsaw puzzle, I got a panicked call from Hunter. The afternoon wind had shifted from the southwest to the west. As a result, tied to a dock at the Chavez Cabin, Hunter's boat had taken on a lot of water. By the time, I got back to the Chavez Cabin, the back end of the boat was sunk. I ran back to check on the Tomasin's boat.

We spent some time trying to figure out a plan for getting Hunter's boat out of the water. He actually got the truck and trailer down on the beach in front of the Chavez Cabin, but with the back of the boat sitting on the bottom, there was no way we could get the boat on the trailer.

After struggling with the boat, we got cleaned up and took a group of nine (2-Hunters, 5-Chabriers {Kay, Brian, Alison, Dana and Carly} and 2-Heringers) to the Happy Garden for chinese food. It turns out that the Tomasins also had chinese food in Redding.

Hunter, Yuli, Tomasin and I finished the night playing pool at the Red Onion on the peninsula until after midnight.
By Heringer at 8/13/2014 11:59:00 PM