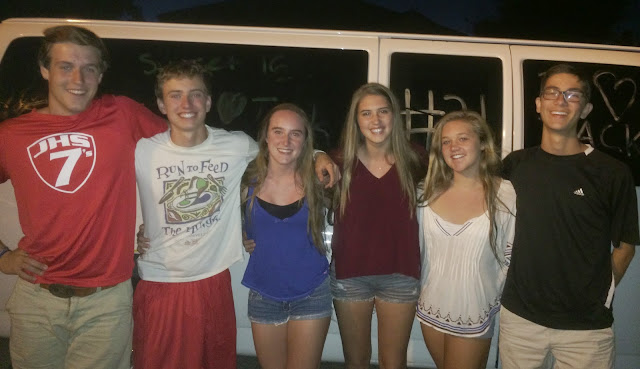 To celebrate Jack's 16th birthday, we took him, his girlfriend and four other friends to Six Flags in Vallejo. Rather than taking two cars to fit everyone, Sharon got the idea to rent a van for the weekend.

Carter and Jason spent Friday night. We left the house about 8:50 am, picked up the three girls (B plus Kara and Emma) in Elk Grove. Hitting some traffic on the causeway, it was about 10:50 am by the time we got to Six Flags. The kids were in the park and off and running before 11:30 am.

Sharon and I headed to Napa. We had lunch at Tra Vigne [trout salad and fig pizza]. After lunch, we hiked about two miles in the Bale Grist Mill State Park on the history trial, including wandering through the mill. We then headed to the Bouchaine Winery; Sharon is a wine club member there.

We scooped the kids back up at 5:45 pm. After a stop for dinner at Red Robin in Vacaville, we were back in Elk Grove to drop off the girls before 8:30 pm. By the time, we dropped Jason and got home it was almost 9:30 pm.

The kids seemed to have a great time both at the park and in the van on the way there and back. We listened to Paradise Sessions, Proper Gentlemen and Milo Greene on the trip home. A long successful day…

Celebrating Jack's 8th Birthday plus a party and a photo album

Celebrating Jack's 7th Birthday plus a party and a photo album

Celebrating Jack's 6th Birthday plus a party and a photo album