2014 Under Armour Southwest Championships 18u Day 4 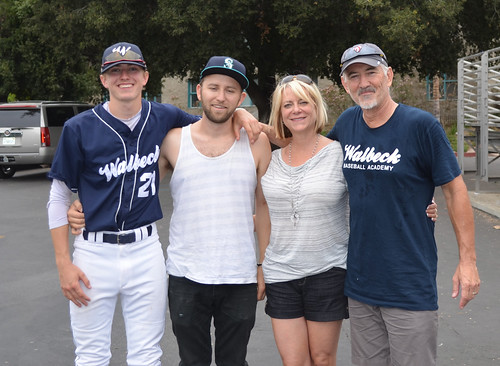 After a light Starbucks breakfast, a work-out in the hotel gym and a stop at Subway to grab some lunch to take to the game, we headed to Azusa Pacific University. The Walbeck Elite played the Prospects National Team at 12:30 pm. This was a team from Texas with six players already committed to D1 schools.

Drew came to the game.

Playing centerfield, Jack had three put-outs. He made a nice attempt on a ball that was hit to deep centerfield. Fielding the ball on one hop, he almost threw the runner out at second.

Behind five strong innings from Weston, the Elite won the game by the score of 3 to 0. The scorecard is here.

In one of the two biggest pieces of news of the day, Jack made the scouting blog for the tournament! At each site, scouts were on site evaluating participating players for the real-time scouting blog.

Under Armour Southwest (18U) Scouting Blog

In the other big news, with the win, the Elite advanced to the elimination round of the tournament. Based on their record and runs allowed, the Elite were seeded #32 out of the #76 teams. They will play So Cal Phillies 18u at Azusa Pacific University at 12:30 pm on Sunday.

On the way back from the game, we drove through downtown Claremont and through Claremont University. We spent the rest of the afternoon around the pool.

Getting cleaned up, Jack, Sharon and I had dinner at the Porter's Prime Steak House restaurant in the hotel with Rod, Julie, Mike, Shawn and Dan. They put the group in a separate room and we had a nice dinner.
By Heringer at 8/02/2014 11:59:00 PM