2014 Under Armour Southwest Championships 18u Day 5

After another light Starbucks breakfast, Sharon and I worked out in the hotel gym. Afterwards we packed up the room and checked out. We are changing hotels tonight. Heading to the game, we stopped for Subway sandwiches. 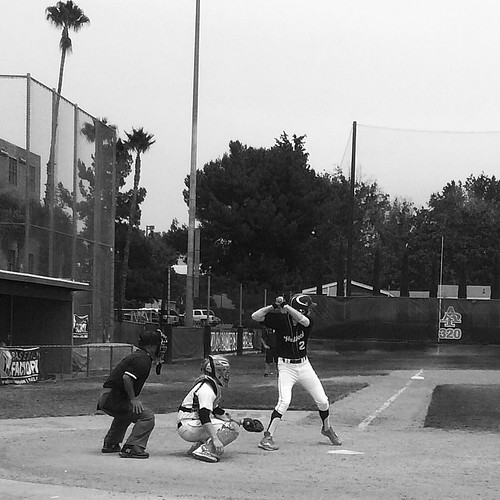 Seeded #32 after the pool play, the Walbeck Elite played the #33 seeded So Cal Phillies 18u at Azusa Pacific at 12:30 pm. The team is made up of players from the San Fernando Valley.

Batting first, Jack was 0 for 2 with a walk, a stolen base and a run scored. In his first at-bat in the bottom of the first inning, Jack ran the count to 1 and 2, fouled off a pitch and then took three straight balls to draw a walk. He stole second, went to third on Coop's single and scored on Isola's ground out. In a six pitch at-bat, Jack grounded a 2 and 2 pitch to the second baseman and was thrown out at first in his second plate appearance. In his third at-bat, he grounded a 2 and 1 pitch to the second baseman to start a 4-6-3 double play.

Playing centerfield, Jack had 8 put-outs!?! I don't ever remember Jack even getting 4 put-outs in a game let alone 8. He did a great job patrolling centerfield.

Behind solid pitching from Wheezy and Child, the Walbeck Elite won the game by the score of 3 to 0. The scorecard is here.

Based on the win, the Elite advanced to play the Hoots East Bay Rep Blue team. The Hoots were the #1 seeded team in the tournament after pool play.

Although we had already checked out, we headed back to the hotel and hung out with the Renterias.

Back at Azusa Pacific University for a 5:00 pm game, the Elite played the Hoots East Bay Rep Blue team. This team is from the Danville area.

Batting 11th, Jack was 0 for 2. In his first at-bat, he smoked a 1 and 1 pitch for a line drive. I was sure it was a hit off the bat. The second baseman made a leaping catch for the out. Coming to the plate swinging with runners on first and second, Jack fouled off four straight pitches before striking out swinging in his second plate appearance.

Playing centerfield, Jack had one put-out.

Lee pitched five gutsy innings and 99 pitches. He left the game with the Elite trailing by the score of 3 to 0. Running out of pitching, the game got away in the sixth. The Hoots scored 5 runs to win the game by the score of 8 to 0. The scorecard is here.

After the game, we headed to Santa Monica. We spent the night at the Viceroy Hotel. Sharon and I had a late dinner around the pool, while Jack had room service.

It was a very successful tournament. If you had told me that the Elite were going to get into the elimination bracket, win one elimination game on Sunday and that Jack was highlighted in the tournament scouting blog, I would have been ecstatic. The only downside was that Jack was unhappy with his hitting.
By Heringer at 8/03/2014 11:59:00 PM