After having some breakfast, Jack, Tiber and I went down to Chabrier's and picked up the patio boat and a wave runner.

Tomasin's boat was out on the water with Brian and Alison {Kay's kids}. We played tag with the ski for a while. Eventually, we ended up sitting and drifting off shore from the Dorado Inn. We played a game of cribbage. Jack took the wave runner for a long run across the lake and around the other side of the peninsula.

Somewhat unbelievably, Hunter picked up his boat and got it back into the water. The local shop went through the engine and then detailed the boat. The boat seems to be running good.

The Tomasin's pulled their boat out. They ended up taking off about noon. The Tomasins are going to a concert in Lake County on Saturday. 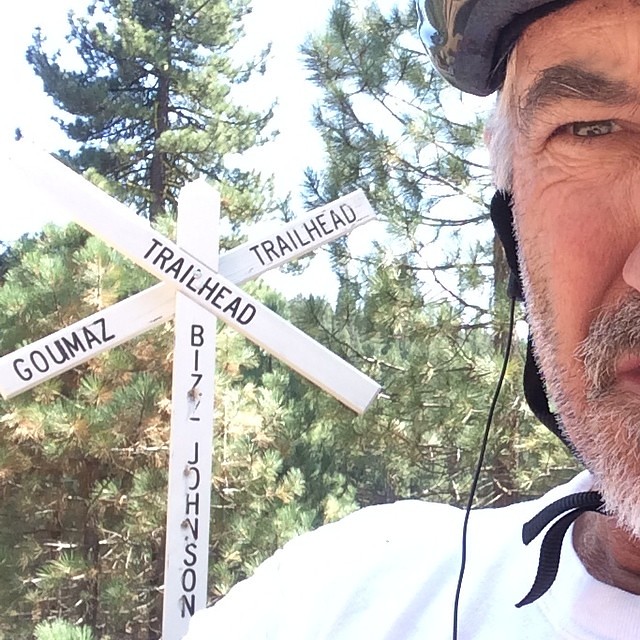 After saying goodbye to the Tomasins, I decided to go back to the Bizz Johnson Trail and do a longer ride than Tomasin and I did on Wednesday. Starting from the Mason Trailhead, I rode more than 12.5 miles to the Goumaz Trailhead and back. With one small incident, it was a great ride. About ten miles into the ride, I was riding downhill fast admiring the ravine to my right when I noticed a stake in the middle of the road about 50 yards in front of me. I was probably moving 16 or 17 miles an hour. When I got on top of the stake, it turned out to be marking an eight inch gully. Trying to jump it at the last second, I ended up launching the bike into the air and landing flat on my back. Luckily, I was wearing a helmet. I am going to post some maps of the ride in the near future. Including this ride, we have explored almost all 25 miles of the Bizz Johnson trail in two other bike rides and a hike.

Finished the night with a late dinner at Luciano’s Cucina di Pasta. This is an Italian restaurant run by Bulgarians. While Kay and some of the yelp postings complained of the service in the past, we had a very nice dinner that was served promptly. It appears that they have added some waiters to the husband and wife team running the restaurant. Jack had seafood ravioli, while I had angel hair pasta with sausage. I would go back again…