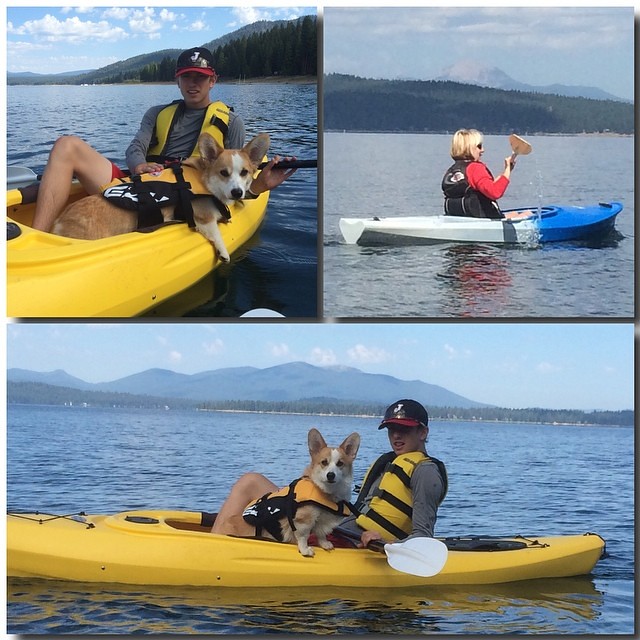 Sharon, Jack, Tiber and I spent the morning on kayaks. We took kayaks south along the shore of the lake to the Dorado Inn. We caught up with the Tomasins who ware out on the ski boat. We continued south until about half way between the Dorado Inn and Chabriers before turning around. When we got back to the cabin. Jack and Tiber stopped, while Sharon and I explored to the north along the shore.

We wandered up to the Chabriers house. It is quickly becoming apparent that it is going to be difficult to coordinate groups at three different locations. We ended up playing cribbage and having sandwiches at the Chabriers.

After lunch, Sharon, Jack, Tiber and I went out on Hunter's boat. We cruised the lake and swam, including tossing Tiber in the lake a couple of times.

Eventually, a large group took the patio boat, Hunter's boat and one of the wave runners to Big Cove. There were more than twenty people, including a friend of Chabrier's from the bay area and their two small girls.

On the way there, Jack and I took the wave runner to Knotty Pines to fill it with gas. Thinking that the group was going to Hamilton Branch, it took us a little while to catch back up with the group.

We anchored the houseboat and tied the boats together. Chabrier threw a number of fishing lines in the water. We visited and had hors d'oeuvres. With the wind coming up, we shifted the group to spot off the Peninsula and drifted.

After heading back to the cabin to get cleaned up, we went back to the Chabriers. With thunderstorms moving in, we spent some time visiting on the front porch and watching the weather. We had a very late dinner at the Chabriers. Chabrier and Kay made a great dinner of flank steak.
By Heringer at 8/11/2014 11:59:00 PM

Email ThisBlogThis!Share to TwitterShare to FacebookShare to Pinterest
Labels: Kayaking