Jack and I left Camichael about 8:45 am. Unlike two weeks ago, it was an easy drive into the city. Picking up Jason on the way, we parked near Jack's apartment before 11 am.

After getting settled in the apartment, Jack, Jason and I caught an Uber to Oracle. Partly as a birthday present for Jack, I took the two of them to Giants versus Phillies baseball game. Jack wanted to sit along the right field wall; I bought three tickets in section 146 [row 6, seats 13, 14 and 15]. Although the temperature got into the 80s, there was a nice breeze. 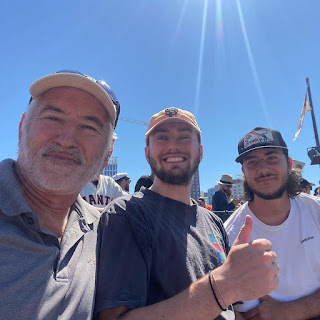 With the score tied 3 to 3 in the bottom of the ninth, we thought that we were going to be there for a while. Wilmer Flores then hit a two out walkoff home run and the Giants won the game by the score of 5 to 3. Carlos Rodon pitched six strong innings for the Giants. He struck out 10 batters, but got a no decision. J.T. Realmuto hit a game tying three-run homer for Phillies in the top of the eighth.

After the game, Jack led us to Local Brewing Company. We had a beer and West Coast IPA Hummus [acompannied by fresh Veggies and house-made focaccia crackers].

From there, we caught an Uber to The Ramp. We caught up with a group that included Jason's girlfriend, MacKenzie.

Eventually, we took an Uber back to Jack and Jason's apartment. We made a quick stop at Trader's Joe's for some food. We finished the night watching episode three of House of the Dragons.
By Heringer at 9/04/2022 11:59:00 PM