THE BEST OF ISTANBUL
Historic Areas of Istanbul

"With its strategic location on the Bosphorus peninsula between the Balkans and Anatolia, the Black Sea and the Mediterranean, Istanbul has been associated with major political, religious and artistic events for more than 2,000 years. Its masterpieces include the ancient Hippodrome of Constantine, the 6th-century Hagia Sophia and the 16th-century Süleymaniye Mosque, all now under threat from population pressure, industrial pollution and uncontrolled urbanization."

A scenic drive takes you across the Galata Bridge into the heart of Istanbul, the largest city in Turkey and the capital of the Ottoman Empire.

You'll see the Byzantine Hippodrome, once the heart of Constantinople's political and sporting life, and the setting for an array of games throughout the history of the Byzantine Empire. Monuments on the site include the Snake Column from Delphi and an Egyptian obelisk taken from the Temple of Karnak at Luxor.

Visit the Blue Mosque, also known as the Sultan Ahmed Mosque. This 17th-century marvel was built to rival and surpass the grandeur and beauty of nearby St Sophia and is a true study in color. It displays a multitude of domes, semi-domes and graceful minarets on the exterior, and inside more than 20,000 shimmering blue Iznik tiles in more than 50 different tulip designs, as well as 216 stained-glass windows.

You'll enter the awe-inspiring Topkapi Palace Museum, a huge walled complex that hugs the Bosphorus Strait. This former palace of Ottoman Sultans is now a museum displaying an extraordinary collection of art, artifacts, and jewels, including the famed Topkapi Diamond. The windows promise breathtaking views of the Bosphorus, the Golden Horn and the Sea of Marmara.

Enjoy lunch at a local restaurant; then you'll visit St Sophia, the Mosque of Divine Wisdom. It was originally built by Constantine the Great, and later rebuilt by Emperor Justinian to be the flagship church of the new empire. St Sophia is one of the greatest surviving examples of Byzantine architecture and is rich with mosaics, marble pillars and coverings.

The Spice Market or Egyptian Bazaar was constructed in 1663 as a part of the adjacent Yeni Mosque complex, to generate funds for the upkeep of the mosque. This was an avant-garde concept at the time - light years ahead of the not-for-profit fundraising game. The Spice Market is the best place to purchase spices familiar and exotic, whose pungent aromas bear little resemblance to the supermarket variety, as well as fresh Turkish Delight, caviar, and a fascinating array of teas before you return to the port.

Walk back to the coach with any purchases in hand.
Please note: Expect dense traffic conditions in Istanbul. This tour is offered to guests who cruise ends in Istanbul or in-transit guests. Modest attire is required; knees, shoulders and midriffs must be covered and shoes must be removed to enter mosque(s). Shoe bags will be provided. There is no visit to the harem section at Topkapi Palace.

As has become my routine on the ship, I wandered up to the Observation Bar to get coffee, enjoy the sunrise and watch the ship sail into port. With the Seabourn Encore docking in Istanbul this morning, a lot more people came up to watch the ship dock.

For the first time on the trip, we had room service. Sharon had oatmeal, while I had pancakes.

The plan for the day was a long seven hour excursion. We met the bus on the dock just before 9 am.

Fighting the traffic, the first stop was the Hagia Sophia Mosque. Although the excursion was supposed to include the Blue Mosque, it was closed for renovation. Originally a Greek Orthodox church, the Hagia Sophia has changed between being a mosque and a museum since the fall of the Byzantine Empire. It is currently a working mosque. It was built by the eastern Roman emperor Justinian I as the Christian cathedral of Constantinople for the state church of the Roman Empire between 532 and 537. The mosque contains a number of columns that were taken from the Temple of Artemis that we saw at Ephesus!

From there, we walked to the Topkapi Palace. From the 1460s to the completion of Dolmabahçe Palace in 1856, it served as the administrative center of the Ottoman Empire. It was the main residence of its sultans until the 17th century.

Both sites were crawling with people. Sharon turned to me while we were in the mosque and said "we are not in Kansas anymore."

After the palace, we walked to a Hilton and had a nice Turkish lunch. The hotel had originally been the residence of a government official. We ended sitting and talking to a couple that were starting their third week on the shop (Larry and Sandy).

After lunch, we had a fairly long wait while the bus tried to navigate the traffic. We eventually wound our way to the Spice Bazaar. Sharon bought some Turkish Delight and tea for the dinner party.

As we were heading to a store with knockoffs that the guide recommended, a fight broke out in middle of the market. About a dozen guys were beating on each other. Sharon had gotten a little in front of me and the fight essentially happened between the two of us; splitting us up. Sharon ended up in a store, while I backed up against the side wall. The market was packed with people. It took a while to get the situation settled down. A couple of times things started to abate, but then exploded again. Connecting back up with Sharon, we continued to the end of the market and looped back to the tour starting point on the outside. The guide said that she had never seen anything like this fight happend before...

Getting back together with the excursion, our last stop was the Rüstem Pasha Mosque. Named after Rüstem Pasha, who served as Grand Vizier of the Ottoman Empire under Sultan Suleiman I, it was designed by the Ottoman imperial architect Mimar Sinan and completed in around 1563. The mosque marked a substantial deviation from thw traditional Ottoman architecture as it relied heavily on İznik tiling instead of favouring a more sparse interior.

The area around the Spice Bazaar was just packed with people. Back on the bus, we were back at the ship about. 4:15 pm.

We spent a little time in the Observation Bar watching the ship sail away from Istanbul. The amount of boat traffic was amazing.

After the long day, Sharon wanted to have room service. We got a couple of hamburgers.

Just after we went to sleep, Jack tried to call. We called him back via Facetime. I have been surprised at how good the internet has been on the ship. I paid for a premium package for the two weeks that allows us to connect four devices. 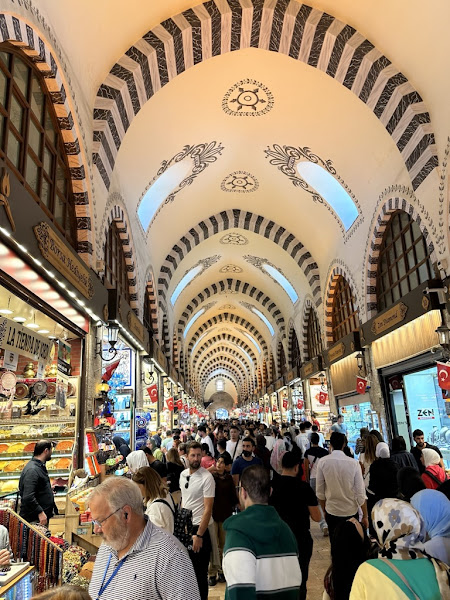