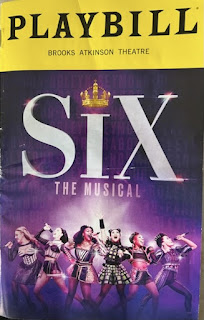 Sharon and Tom's New York Adventure
Sharon and Tom spent the morning exploring the financial district and Wall Street, including the 9/11 Memorial. They had lunch at Fraunces Tavern. The tavern is New York’s oldest and most historic bar and restaurant. It is a National Landmark building that once served as a watering hole for many of the Founding Fathers of the United States of America.

Friday night, they went to see Six at the Brooks Atkinson Theatre. Tom's description was "fantastic broadway musical all female cast and musicians telling their stories of being married to Henry VIII, including 1-Divorced, 2- beheaded, 3- died, 4-divorced, 5-beheaded, 6-survived."
By Heringer at 9/02/2022 11:58:00 PM