Exclusive Lunch in Ephesus, Terrace Houses & St John's Basilica
Top 3 Reasons To Book
"Located within what was once the estuary of the River Kaystros, Ephesus comprises successive Hellenistic and Roman settlements founded on new locations, which followed the coastline as it retreated westward. Excavations have revealed grand monuments of the Roman Imperial period including the Library of Celsus and the Great Theatre. Little remains of the famous Temple of Artemis, one of the Seven Wonders of the World, which drew pilgrims from all around the Mediterranean. Since the 5th century, the House of the Virgin Mary, a domed cruciform chapel seven kilometers from Ephesus, became a major place of Christian pilgrimage. The Ancient City of Ephesus is an outstanding example of a Roman port city, with sea channel and harbor basin."

Showcasing the religious history of ancient Turkey, your day starts with a pleasant drive through the countryside to visit the city of Ephesus. The stunning structures here, dating predominantly from the later Roman period, include the façade of the Celsus Library and Hadrian's Temple. The Sacred Way was one of the main thoroughfares used by the Romans.

You will also visit the Terrace Houses located opposite Hadrian's Temple -- a newly-excavated residential section of Ephesus. The wealthy and important people of Ephesus used these houses, so they are finely decorated with mosaics and frescoes, giving a true impression of the ancient lifestyle. Those on the upper slopes of Bulbul Mountain are reached by steps, and the roof of one house forms the terrace of the one above it. Continuing from the library to the end of the marble street, you can look up at Ephesus' impressive amphitheatre where St Paul preached to the Ephesians.

In the town of Seljuk, you will visit the ruins of the Basilica of St John. The Basilica had a cruciform plan with four domes along its longitudinal axis and a pair flanking the central dome to form the arm of the cross. The tomb of St John was placed under the central dome.

Visit Solmissos-- a setting that, to some, is a shrine; to others it is a mere curiosity. It is reputedly the home of Mary, the mother of Jesus Christ. Archaeological evidence shows that the little house you will see here dates from the 6th century AD, but that its foundations are indeed from the 1st century AD. This ties in with the commonly held belief that Mary moved to Turkey after the crucifixion.

Enjoy a delicious and exclusive picnic-style lunch at the site of the Harbor Baths in the heart of Ephesus -- an amazing opportunity to rest and refuel among some of the most famous ruins in the world.

Returning to Kusadasi to enjoy a optional carpet demonstration and some time for shopping. Explore the town and return to the pier at your own pace.
I have started every morning going to the Seabourn Square and getting a couple of Americano Coffees. For the first time on the cruise, we are docked in the port rather than using tenders to get ashore; the Seabourne Encore is docked in the Turkish port city of Kuşadası.

We had a light breakfast at the Colonnade. Wandering down the gangway, I was surprised to find that our excursion included only nine people and the transportation was a sprinter rather than a bus.

The first stop was the the Basilica of St John. St. John was buried in the Basilica. From there, you can see a single column marking The Temple of Artemis, one of the Seven Wonders of the Ancient World..

The second stop was the The House of the Virgin Mary. It is believed that Mary, the mother of Jesus, was taken to this stone house by Saint John and lived there for the last years of her life.

The third stop was the Romain city of Ephesus. The ruins were designated a UNESCO World Heritage Site. We did a guided walking tour that included terrace houses. We had an private lunch on the Harbor Road.

For the fhird day in a row, we had a guide. Unfortunately, this guide was a little harder to understand than the first two. 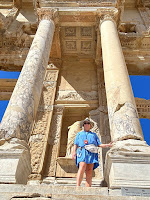 The final stop back was back in Kuşadası was a carpet making demonstration. Thankfully, they weren't able to sell Sharon any carpets or jewelry!

We had a early buffet dinner in the Colonnade. It was a zoo. Everyone was getting an early dinner in order to take off for the complimentary evening excursion.

We finished the day with an excursion back to Ephesus. Almost everyone on the ship caught buses back to the site. Seabourn had a classic music concert set up in front of the Great Theater. After the concert, we jumped on the first bus back to the ship.