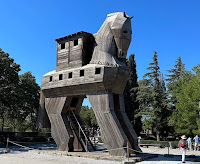 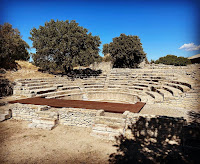 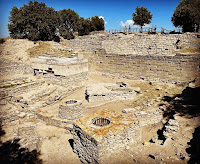 Troy, with its 4,000 years of history, is one of the most famous archaeological sites in the world. The first excavations at the site were undertaken by the famous archaeologist Heinrich Schliemann in 1870. In scientific terms, its extensive remains are the most significant demonstration of the first contact between the civilizations of Anatolia and the Mediterranean world. Moreover, the siege of Troy by Spartan and Achaean warriors from Greece in the 13th or 12th century BC, immortalized by Homer in the Iliad, has inspired great creative artists throughout the world ever since.

A 45-minute boat trip brings you from Bozcaada, where you'll drive to the ancient city of Troy. Dating back some 4,000 years, Troy started as a Bronze Age settlement before Greek, Roman and Byzantine rule, and finally ending up in ruins.

Pick a path around the ruins, which include ancient carvings, dwellings and an amphitheatre. Your guide will share interesting information about the ancient city, including the myths and legends for which it's famous.

Return to the boat; then, cruise back to Bozcaada.

My morning routine has settled into wandering up to the Observation Bar about 6:15 am. I have coffee, watch the sunrise, enjoy the view as the ship sais into port and work on the blog. The port for today is Bozcaada, Turkey.

With Sharon feeling under the weather, we had breakfast on the Colonnade. She ended up making a decision to skip the excursion.

I have to be honest; I didn't really understand where Troy was. Catching the tender at 9 am, the excursion boarded a ferry. It was a thirty minute ride to the Turkish mainland. From there, the group boarded a bus for a forty-five minute ride north to Troy.

The city sits on top of hill with a view of the Aegean Sea entrance to Dardanelles Strait. Like Ephesus, the original port has been silted up. The ocean is now several miles from the city.

We took a guided tour of the ruins. The guide said that only about 10% of the city has been excavated. As you would expect from a 4,000 year old site, it is pretty rough.

After the tour, we wound our back on the bus and then the ferry. The ferry back was a little bit of a zoo. Apparently, it was the last ferry of the day and it was packed with people. The area around the ferry terminal was jammed with cars that weren't able to get on the ferry. We had to get off the bus and walk 1/2 to the ferry.

I was back on board the Seabourn Encore about 3:30 pm. Sharon and I headed up to the Observation Bar just after 5 pm to watch the ship leave port.

We had dinner in the Colonnade. They served an interesting buffet of Indian food.

I finished the night going back and forth between deck seven on the back of the boat and the Observation Bar on deck eleven at the front of the boat watching the ship sail through the Dardanelles Strait. At one point, the strait is less than 0.75 of a mile wide. 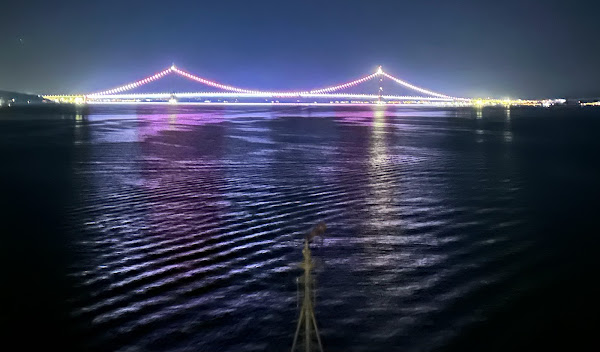