Oia Village and Greek Cooking
Top 3 Reasons To Book
Experience the best of Santorini with a visit to the beautiful village of Oia, followed by delectable Greek cuisine during a cooking class at a well-known local taverna.

Tender ashore and board a comfortable motorcoach to begin your ascent of the colorful, rocky caldera wall. Outside your window are breathtaking panoramic views the whole way up. As you reach the top, you'll head north through traditional villages. Along the way, your guide will point out the different layers of volcanic lava produced at various phases of the volcano's activity.

In Oia town, stroll with your guide through the cobblestone streets, admiring the world-famous Cycladic architecture and the beautiful old mansions perched on the cliffside. You'll also have magnificent views of the caldera and other smaller Cycladic isles.

Relax on the scenic drive to the Akrotiri area, where you'll stop at the Aeolos Taverna. Upon arrival, you will be greeted with a chilled glass of wine or ouzo (traditional aniseed flavored liqueur) and samples of local Santorinian specialties, as well as some of the more popular Greek dishes. A cooking demonstration by the master chefs at this acclaimed taverna will showcase local ingredients and unforgettable techniques that are sure please the palate. After the demonstration, enjoy the chef's creations in the form of a sumptuous lunch.

At the conclusion of the tour, re-board your motorcoach for the drive back to the town of Thira. Guests who wish to stay in town to shop or explore are welcome to do so, but must return to the ship on their own. It's a three-minute walk to the cable car that will take you back down to the pier.

Sharon and I both wandered up to the Observation to watch the ship sail into the caldera. It was pretty spectacular. Sharon had a light breakfast. I ended up dashing to the Colonnade for a quick breakfast.

Gathering in the Club on deck five, we caught a large tender to the new port. We boarded us on a bus that climbed up a series of switchbacks to the rim of the caldera.

Have I have said recently how much I dislike heights?

The first stop for the excursion was Oia. We wandered the edge of the city and took some pictures. We had about an hour of free time.

Back on the bus, they took us to the other end of the island for a cooking demonstration and lunch. We got a few more ideas for the dinner party. The lunch was very good. The view was spectacular.

After lunch, we took us back to Fira in the middle of the island. Sharon and I wandered the city for a while. Apparently, we were lucky; there were only two small cruise ships in port. The guide talked about how there were five cruise ships earlier in the week, including two large ones and the island was overrun.

Eventually, we stopped for a glass of wine in a restaurant overlooking the caldera. Afterwards, we took the cable car to the old port and caught a tender back to the ship.

For the second day in a row, we went to the pool on deck nine. We bounced between the pool and the hot tub.

We got cleaned up and headed up to the Observation Bar for a drink. From there, we headed to the Colonnade for dinner. At this point, the fun started. We were obviously behind everyone else in going to dinner. We got seated inside. As we ordered, the waiter said "things are a mess." Forty-five minutes later, we still didn't have any starters.

Sharon wandered off to talk to someone. At this point, the place was pretty empty. Sharon got them to move us outside. Even though one of Sharon's starters came just as we went outside, they reordered our food.

With a late departure from port, the silver lining was that we got to watch the ship sail away from Fira and Oia and out of the caldera. Eventually, Sharon got her artic char and I got my salmon. We have been generally unimpressed with the food. More on that in a future post... 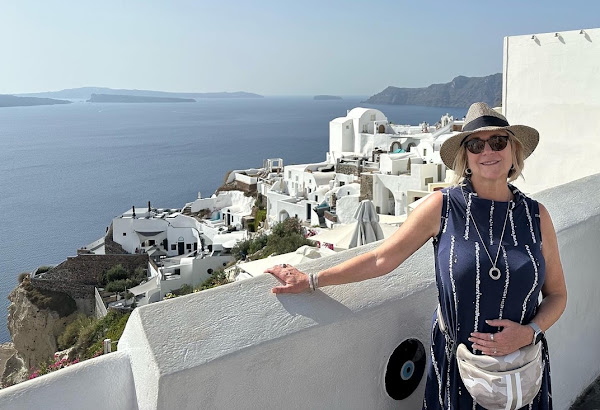