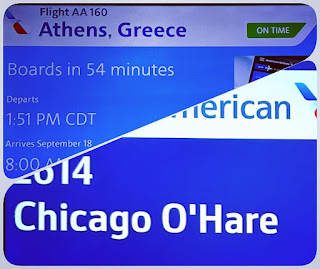 I set an alarm for 2:55 am, but Sharon was up and moving around about 2:30 am. Taking a shower and packing up the room, we were down in front of the hotel about 3:45 am. Our original intention was to take an Uber to the airport, but it was taking too long for one to arrive. We ended up taking the 4 am hotel shuttle.

With one other shuttle stop, we got to the airport about 4:20 am. Checking the bags and getting through security went relatively quickly. We used CLEAR, but it really didn't save us much time.

We boarded a 6 am American flight from San Francisco to Chicago. On this leg, we have an aisle and middle in the exit row of a new 737-800. The flight pulled away from the gate a couple of minutes early.

The flight landed in Chicago about thirty minutes early. Coming from Heathrow, our connection was already there. After a quick glass of wine and a snack, we boarded the flight to Athens. We cleared the second of the two hurdles that I have been dreading: the connection in Chicago.