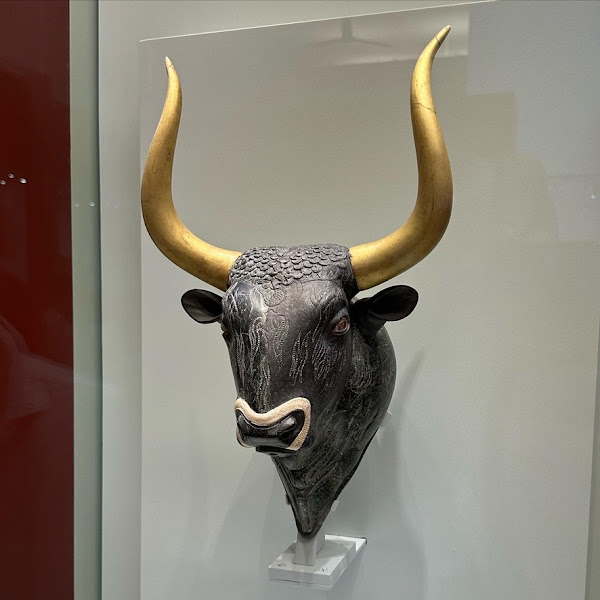 Extraordinary Knossos in 3D Augmented Reality & Archaeological Museum
Top 3 Reasons To Book
Your first destination on this full day tour is the renowned archaeological site of the Palace of Knossos. This locale was once the religious and administrative center of the Minoan world.

Explore the labyrinth built to confine the fabled Minotaur -- a mythical beast born out of the unnatural union between King Minos' queen and a bull. Legend holds that the king fed his enemies to this monster until the secret of the labyrinth was finally unraveled.

A guided tour takes you through the ruins of the palace complex, now excavated and partially reconstructed to offer a better understanding of the complex labyrinth. View the living quarters of the monarchs, the storerooms, potters' workshops and the theater.

You will see the ruins in a most extraordinary fashion, with the aid of Augmented Reality Software (AR). Augmented Reality combines the camera's content with a virtual one. In other words, it is a mixture of the real-time video and many different virtual elements. AR essentially enables you to simply point the tablet's camera at various locations of the site and view them in their original form, as they once stood thousands of years ago. It is an amazing way to view the site as both the ruins of today and the complete, whole buildings of yesteryear. Relax over a typical Cretan lunch at one of the finest restaurants in town.

Next up is a visit to the Archaeological Museum of Heraklion -- one of the most important museums in Greece with a notable and complete collection of artifacts from the Minoan civilization. All the main artifacts are on display -- the Phaistos Disk, the Snake Goddess, the Bull-Leaping and King of the Lillies frescoes.
Both Sharon and I were up very early. We were moving around about 5 am. We haven't completely adjusted to the time change yet.

We had a quick breakfast at the Colonnade. We had to be at the Grand Salon at 7:45 am. They put us on the first tender to Agios Nikoloas. Loaded on a bus, it was more than an hour ride to the Palace of Knossos. The guide did a running commentary the whole way talking about the island and its culture. I really enjoyed getting a chance to see so much of the island.

We had ear pieces to listen to the guide and a tablet with a 3D representation of what different parts of the palace would have looked like in its heyday.

From there, we went to the Archaeological Museum of Heraklion. We did an hour plus guided tour focusing on the Minoans section of the museum.

We had a late luch at Parasties in Heraklion. Getting back on the bus, it was almost an hour and twenty minute ride back to the dock in Agios Nikoloas.

Getting a tender back to the Seabourn Encore, we were back on board about 30 minutes before the ship left. This time, we watched ship leave from our balcony.

The dress for the evening was formal. We got cleaned up and dressed. We had a drink at The Club bar. Standing in line at The Restaurant, the couple behind us was a couple that we had met at lunch [Joe and Laurie from Pleasanton]. They joined us for dinner. I had seared Tuna, while Sharon had Beef Wellington.

After dinner, we went to the Grand Salon and watched part of a comedy show. I was falling asleep. We ended up crashing just after 11 pm. 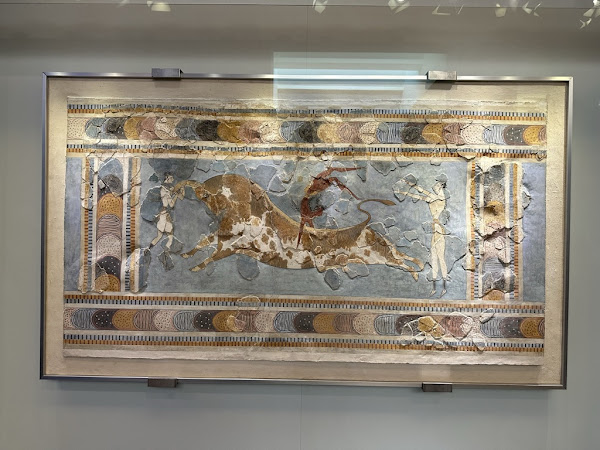