Still feeling a little under the weather, Jack played in his eleventh game of the 2008 little league season against the Dodgers. One of his classmates, Jeffery, played on the other team.

Jack was 1 for 3 at the plate. In his first plate appearance, he lined one to the right side of the infield and was thrown out at first. With the bases loaded, Jack hit a single into right center his second time up and drove in two runs. He eventually came around to score by stealing home. In his third at-bat, Jack struck out.

Jack played four innings of the five inning game at shortstop. He had a mixed game in the field. He made a couple of nice catches on a line drive and a pop up. Ranging far to his left, he knocked down a grounder; Jack was able to find the handle and tag the base in advance of the runner. He also had a grounder that he could not handle that caught him in the elbow.

The Padres jumped out to a 10 to 5 lead, but could not hold it. Their pitching which has actually been better than I expected for most of the year collapsed. They lost by a score of 19 to 11 in five innings. Their record is now 5 wins, 5 losses and 1 tie. 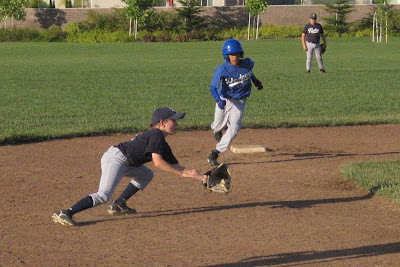