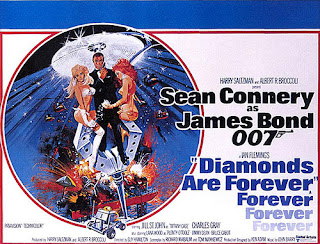 We are continuing to slowly work our way through the James Bond films in chronological order. Saturday night, we watched Diamonds are Forever. Released in 1971, this is the seventh film in the James Bond Series. It is the sixth starring Sean Connery.

The story has Bond impersonating a diamond smuggler to infiltrate a smuggling ring, and soon uncovering a plot by his former nemesis Blofeld to use the diamonds and build a giant laser satellite that would be used to hold the world to ransom.

A large part of the film takes place in and around Las Vegas. It was interesting to see Las Vegas as it was more than 35 years ago. This includes a chase scene through the old downtown in a 1971 Mustang.