Jack played in his twelfth baseball game of the 2008 little league season against the Mariners. The Mariners have the best record in the league with 10 wins and 1 tie. The team is coached by the team coach for the 9U Laguna youth traveling all-star team.

Jack was 1 for 3 at the plate. He grounded to deep short and got throw out by a step in his first plate appearance. In his second at bat, Jack hit a high chopper to the right side. He, the pitcher and the first baseman all reached the base at the same time. The ball rolled away, the first baseman ended up in a heap and Jack was safe. He struck out his third time up. While I never complain about the ball and strike calls, several of the umpire's strike calls seemed wildly inconsistent. It makes it very difficult for the kids when umpire expands the strike zone.

Jack played four innings at shortstop. It was one of those odd games where nothing was hit to him.

Leading 4 to 2 in the third, the roof feel in. The Padres gave up eight runs. There were four or five routine fly balls that the kids could not get under.

In the third, fourth and fifth innings, Jack's team had runners on third base, but could not get the runners home. 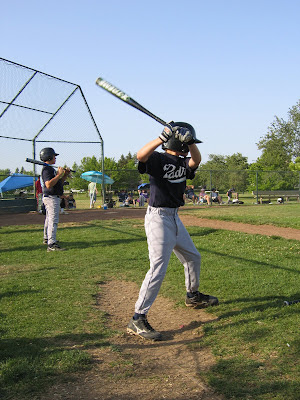