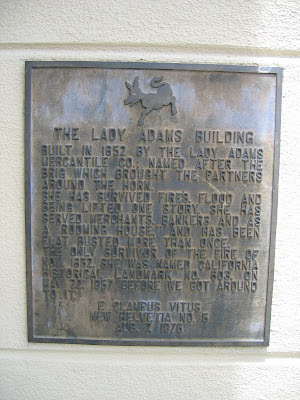 The Lady Adams Building
Built in 1852 by the Lady Adams Mercantile Co.; Named after the Brig which brought the partners around the horn.

She has survived fires, floods and being lifted one story. She has served merchants, bankers and as a "rooming house," and has been flat busted more than once. 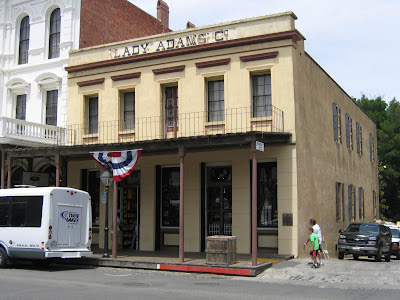 The Lady Adams Building was built in June of 1852. It was named after the ship Lady Adams that brought goods and its first owners, two German merchants, around the Horn and up the river. They began their business in a tent, and later hired men to build a store, mostly out of the ship itself. It is the oldest building in Old Sacramento. The mast was later used as a “backing-up” place in the gutter for horses and wagons to back up to. The bricks used to build Lady Adams acted as ballast in the ship. The building's original owners were importers and wholesale merchants, and also bankers.

It was one of only four buildings that survived the fire in November of 1852, which swept through the downtown area. It survived because of its heavy brick roofing.

By the 1950's “Old” Sacramento was a teeming skid row, and the Lady Adams building was used as a brothel and a flophouse. Eventually, the building was unused and fell into disrepair. In August 1970, the heavy roof caved in, causing part of the building to collapse. Shortly afterward, however, the building was carefully restored as the city worked toward creating Old Sacramento.
Posted by Heringer at 5/15/2008 11:59:00 PM