Jack and I went to the May meeting of his Cub Scout Pack. The Pack organized the meeting partially as a recruiting event to get some younger kids interested in joining for next year.

The afternoon included a number of activities. One of the dads is a chemist. He walked the kids through a number of experiments, including combining mentos with Diet Coke.

Next, the kids fired the rockets that they made at the April Pack meeting. The rockets were made from large soda bottles. Using compressed air, the boys were able to shoot the rockets as much as 100 feet in the air. Several of the adults attempted to a fire a model rocket for the kids, but could never get it to ignite.

The kids finished the afternoon with a water balloon fight. 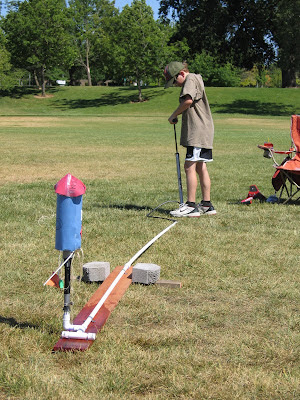