Up a little slow due to the time change and the travel schedule, I ran for an hour on the treadmill in the hotel. After getting cleaned up, I wandered down to Bryant Park and through the main branch of the New York Public Library. Afterwards, I met Drew and Kaylen.

We jumped on the subway and headed to the American Museum of Natural History. Neither Kaylen or I had been there before. We spent all afternoon at the museum, including catching the Hayden Planetarium show titled Cosmic Collisions and touring the the Butterfly Conservatory. The museum has a dizzying array of exhibits. The number and breadth of dinosaur skeletons was particularly impressive. I also enjoyed the life size whale hanging from the Milstein Hall of Ocean Life and the elephants in the the Akeley Hall of African Mammals.

Drew reminded that this was the museum that underwrote Roosevelt's journey documented in the book River of Doubt. I had given both Drew and Morgan a copy of the book earlier this year.

We jumped on the subway and headed back to the hotel. We visited in the room waiting for Morgan to wind her way into the city from Sarah Lawrence. We celebrated Morgan's 21st birthday in the room with a bottle of champagne and presents.

Stopping at the concierge, he pointed us towards an Italian restaurant called Becco. We had a very nice dinner. Drew, Kaylen and I had the special pasta dinner, while Morgan had some stuffed peppers.

We hustled from the restaurant to the Hilton Theater. We saw Young Frankenstein. The cast included Roger Bart who played George the pharmacist on Desperate Housewives and Megan Mullally who was Karen Walker on Will & Grace.

After the show, we grabbed a cup of coffee and visited before the kids headed off. 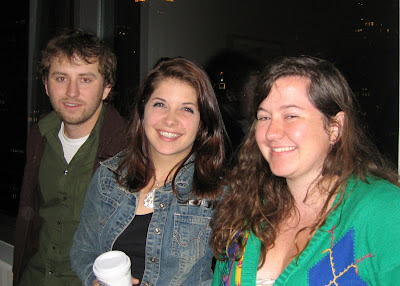