Headquarters of the Big Four
California State Historical Landmark #600
This landmark number has been retired and this landmark site is now included as part of the registration of Old Sacramento, Landmark #812.

The reconstructed building is located on I Street west of the California Railroad Museum. There are 57 other California State Historical Landmarks in Sacramento County. The GPS coordinates for this location are N 38° 35' 4.17" W 121° 30' 16.38". 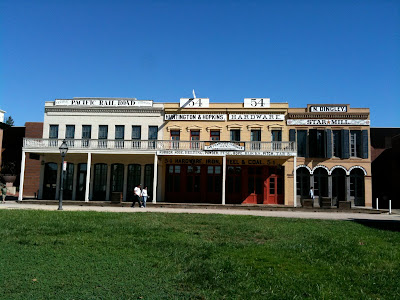 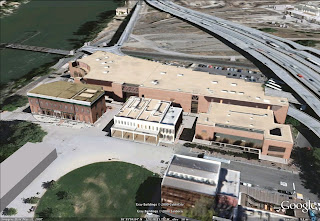 From the late 1850s and into the 1880s, the Big Four Building occupied much of the entire south side of K Street between 2nd and 3rd Streets. The store’s telegraph address, "54 K Street," was also its physical address.

At street level, the Stanford Brothers Warehouse and the Huntington, Hopkins & Company Hardware Store occupied interconnected buildings. At first, the second floor spaces were occupied as living quarters by the Huntington and Hopkins families. But as both businessmen became more prosperous and were able to build homes in residential areas, the upper floor of the Huntington, Hopkins & Company side was used as a stockroom and as lodging for the store’s clerks. Most important among the Stanford side’s upstairs tenants was the Central Pacific Railroad, established by Charles Crocker, Huntington, Hopkins, and Stanford. The Big Four Building would serve as the railroad’s first headquarters, throughout the challenging years of construction and into the first decade of transcontinental operations.

However, by the late 1870s both the railroad and the hardware store had grown beyond the capacity of the Sacramento area. The Central Pacific Railroad especially needed the access offered by a big city. Thus, in the early 1880s, both were moved to a large storefront in San Francisco.

By the time construction for Interstate 5 necessitated the building’s demolition in 1963, there was little evidence left to suggest the site held historical significance. The California Department of Parks and Recreation determined that the Big Four Building was worthy of preservation, at least in spirit. When the time came for demolition, a sampling of decorative elements and building materials were set aside for future use. A site was found, next to the historic Nathaniel Dingley Steam Coffee & Spice Mill building on I Street, upon which to re-create a new Big Four Building in 1965.
at 10/01/2009 11:59:00 PM